Abortion is the delivery of a dead foal and its placenta before an age at which the foal would have been able to survive independently.  This is usually taken to be up to day 300-310 of gestation. After 300-310 days, if a dead foal is delivered it is usually termed stillborn.

The abortion of a well-grown foal is a distressing event and may be associated with dystocia (difficult foaling), requiring veterinary help.  Depending on the cause of abortion (particularly with twin abortion and placental disease), early warning signs such as premature mammary development, vulval discharge or other signs of systemic disease (high temperature and colic) may occur.  In other cases, notably with Equine Herpesvirus infections and umbilical cord twists, abortion occurs suddenly and without warning. 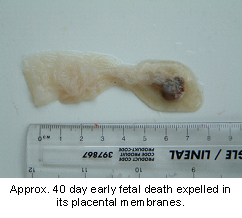 Pregnancies may fail for a number of reasons, involving infectious and non-infectious causes and involving abnormalities of the fetus, placenta and/or umbilical cord, or the mare herself. A detailed post-mortem (necropsy) examination is required to confirm the cause of the abortion, its likely affect on the mare and other in-contact pregnant mares. Your veterinarian will help you organize for this examination to be performed, when required.

About 10% of equine pregnancies (after a positive 6-week pregnancy test) end in abortion. Most are due to non-infectious causes but a significant number are caused by viral or bacterial infections, some of which may be contagious. A small number are associated with fungal infections of the placenta.

Infectious
Equine Herpesviruses 1 and 4 (EHV-1 and EHV-4) are common causes of respiratory disease in horses, particularly weanlings and yearlings. In pregnant mares, EHV-1 infection can cause abortion, stillbirth or the birth of a weak, failing and non-viable foal. 'Virus abortion' as this infection is widely known, may result in 'abortion storms', where large numbers of non-vaccinated in-contact pregnant mares 'slip' their foals. Where pregnant mares are vaccinated against EHV-1 and 4, single abortions are more common. In rare instances, EHV-4 can cause single abortions but has not been associated with 'abortion storms'.

EHV enters the body via the respiratory tract. In some pregnant mares the virus may cross the placenta and infect the fetus, damaging the fetal lungs and/or liver in particular. Mares seldom show overt signs of respiratory infection and mares usually abort without warning anywhere from one week to several months after initial infection. The third month of pregnancy is considered a high risk period for pregnant mares to come into contact with EHV infection and this is a time when mares and foals are often returning home from being away at stud elsewhere, often with 'dirty noses'. At this time of risk, batch isolation is a sensible precaution to try to minimize spread of infection to other susceptible pregnant mares.

There is no specific treatment for EHV infections but vaccines against EHV-1 and 4 are available to help with prevention. Vaccination is recommended from 4-6 weeks of age in all horses, in order to reduce the incidence of respiratory disease in the horse population in general and to reduce the incidence of disruptive EHV respiratory disease 'down time' in racing, sport and leisure horses in particular. One vaccine is licensed for use as an aid to the control of EHV abortion in pregnant mares and is recommended for use in all pregnant mares during their 5th, 7th and 9th months of gestation. Vaccination does not prevent all EHV abortions but markedly reduces the risk of an 'abortion storm', which can be financially disastrous. Vaccination also reduces the incidence and severity of EHV respiratory disease on stud farms, reducing the spread of infection and therefore the risk of EHV abortion. When an EHV abortion occurs, the fetus, placenta and placental fluids are heavily contaminated with virus and can act as a source of spread of infection to other pregnant mares. The foal and placenta should be sent to an experienced equine pathology laboratory without delay for a detailed postmortem examination. The mare should be separated from other pregnant mares and kept isolated and no horses should move off the premises until the results of the tests are known.

As a general principle, pregnant mares should not be in contact with weanlings, yearlings, young horses out of training and other show and performance horses. New arrivals should be isolated for 2-3 weeks and monitored for signs of infection (raised temperature, runny nose/eyes, cough) prior to being allowed to run with the other pregnant mares.

Epidemic EHV abortion can be financially ruinous to a stud farm and failure to vaccinate pregnant mares may turn out to be false economy. 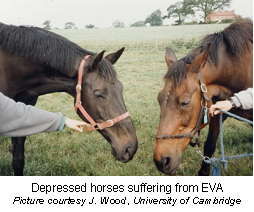 Equine Viral Arteritis (EVA) may cause systemic illness and abortion. Signs of infection vary in manifestation and severity but can include elevated temperature, depression, eye and nasal discharges, swelling of the eyelids and lower abdomen and scrotum. Conjunctivitis ('pink eye') is a warning although not confirmatory sign. EVA infection can occur without obvious symptoms and an infected stallion can act as a source of infection while showing no signs of disease. The virus lives in the accessory sex glands of carrier stallions. Such stallions are known as asymptomatic carriers or 'shedders', because they shed virus in their semen at natural mating or artificial insemination (AI). Virus is spread from the respiratory tract of infected mares and may quickly spread around enclosed, i.e., barn-type stables. If mares are infected during their pregnancy, the virus may damage the placental blood supply and they may abort. The aborted fetuses and their membranes are sources of spread of infection to susceptible, in-contact mares.

There is no specific treatment for EVA infections. There are no testing or control measures in the USA. Carrier stallions and their semen cannot be imported into any country except the USA or Canada.

An inactivated EVA vaccine (Artervac) is available for use in some EU countries, including UK. A live EVA vaccine (Arvac) is used in the USA. Breeding stallions are recommended for vaccination, in order to reduce their chances of becoming semen shedders if they were to become infected. Vaccination results in positive blood test results and therefore complicates surveillance. For advice on vaccination you should contact your veterinarian.

Bacterial and fungal infections can gain access to the placenta via the mare's cervix, via her vagina, infecting the placenta (placentitis) and usually resulting in abortion. Many types of 'opportunist' bacteria can cause placentitis including Streptococcus spp. and Escherichia coli. These bacteria are found in the vagina of normal mares. Klebsiella pneumoniae, Pseudomonas aeruginosa and Taylorella equigenitalis are potential venereal pathogens, which can cause abortion. Fungal infections of the placenta can also cause abortion in the second half of pregnancy.

Mares with poor vulval confirmation, who suck air into their vaginas when they walk and trot or who have had damage to their vulvas, vaginas or cervixes as a result of foaling trauma are at increased risk of developing opportunist bacterial placentitis. Some mares respond to the placentitis with premature mammary development and this can be a warning sign. Some infected mares develop a purulent vaginal discharge that can be usefully examined in the laboratory to identify the infecting organism.

Bacterial placentitis is difficult to treat successfully because by the time symptoms have developed the disease processes are already significantly advanced. Some antibiotics given systemically (either by injection or by mouth) do cross into the placenta and may control the infection but may be ineffective in controlling the damage to the placenta and fetus caused by infection. Anti-inflammatory drugs and medications are sometimes used to improve placental blood supply in addition to antibiotics.

To minimize bacterial and fungal infections, that may lead to abortion, stallions and mares should be swabbed prior to mating to rule out the presence of venereal pathogens such as Taylorella equigenitalis, Klebsiella pneumoniae and Pseudomonas aeruginosa. Infected horses should be treated appropriately and then three sets of negative swabs obtained before mating is allowed. All mares should have an endometrial (uterine) swab taken during estrus prior to mating. If infection is present, treatment should be given and recovery confirmed before the mare is mated. The vulva should be stitched (Caslick's operation) to an appropriate level if the vulval seal is not adequate.

There are many non-infectious causes of abortion in mares.

Congenital and developmental abnormalities are important causes of abortion in mares. Occasionally a fetus develops with a severe abnormality such as hydrocephalus (water on the brain), or physical deformity that means it is unable to survive beyond a certain stage of gestation. These foals are often aborted or stillborn. Such conditions are unusual and do not tend to recur in the mare. The cause is usually unknown.

Twin pregnancy used to be an important cause of abortion in mares. The placenta of a single foal normally occupies the whole of the uterus. When twins are present, the two fetuses have to share the uterine space resulting in a reduction of nutrition to both fetuses. Usually, one fetus dies and both are aborted soon afterwards. Occasionally, one is born alive and if large enough will survive but will remain small. Only rarely do both survive. Routine ultrasound examinations of early pregnant mares have reduced the number of twin abortions to very low levels. Twin (and occasionally triplet) pregnancy can usually be diagnosed at 15 to 17 days, when experienced veterinarians can reduce the twins to a singleton.

Umbilical cord abnormalities have become the most common cause of abortion in Thoroughbred mares. The umbilical cord in the horse is normally approximately 31.5 inches (80 cm) long. Sometimes, and more commonly when the cord is longer than 31.5 inches (80 cm), it becomes excessively twisted either on itself or around part of the foal such as one of the limbs or the neck. This results in strangulation of the foal's blood supply and its death. Abortions due to cord abnormalities usually occur in the last third of pregnancy.

There are other miscellaneous causes of abortion. These include stress, malnutrition and trauma to the mare.  Toxic causes (poisoning) can result in abortion if the placenta or fetus is affected.

Mare Reproductive Loss Syndrome (MRLS) is a condition observed in parts of the US during 2001 and to lesser degrees in 2002 and 2003, where large numbers of mares either aborted late with damaged placenta or lost early pregnancies with hemorrhage in their fetal fluids. The precise cause of the pregnancy losses has not been determined but it was related to ingestion of Eastern Tent Caterpillars. Research suggests that bacterial infection and perhaps toxins may have gained access to the mares' blood streams via penetration of the tiny barbed hairs (setae) that occur on the outer skin of the caterpillars, when they were unavoidably eaten by the mares during an unusual caterpillar 'plague'. The problem has been controlled by removing the black cherry trees on which the caterpillar population feed and make their 'tents'.

How can abortion be prevented?

Abortions will never be abolished but they can be kept at low numbers by good general and gynecological and obstetric management of broodmares. Epidemic EHV abortion can be controlled by vaccination of broodmares and EVA abortion by avoidance of importation of infection.